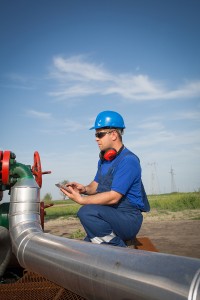 Denbury Resources has announced the startup of the first oil production project in Montana that uses the “enhanced oil recovery” technique of carbon dioxide (CO2) flooding.

In this process, CO2 is pumped underground into an oil-bearing rock formation. The CO2 mixes with the oil, releasing it from the surrounding rock, and the pressure from the injection pushes the oil up through a well (i.e., steel pipe) to the surface.

After more than $300 million dollars in investment and three years of development, the company expects to extend the life of Montana’s Bell Creek Oilfield by decades and to produce more than thirty billion barrels of additional oil there.

Engineers are now injecting CO2 4,500 feet below the surface into tiny oil-filled pores of a forty-foot-thick section of rock called the Muddy Sandstone. The pressure used to pump the CO2 into the ground moves the resulting mixture into adjacent wells (called “producers”), where it travels to the surface. On the surface, a facility separates the CO2 from the oil, sending the oil to a pipeline, and reinjecting the CO2 back into the ground, where it separates more oil from rock. . . .