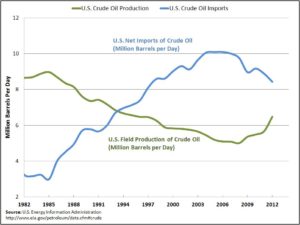 The expectation is that imports will sink to their lowest volumes since 1995, while crude production for the fourth quarter of 2014 will increase to levels not seen since 1988. According to the EIA, “This projected change is primarily because of rising domestic crude oil production, particularly from shale and other tight rock formations in North Dakota and Texas.”

This bounty is made possible by the widespread implementation of hydraulic fracturing (fracking, or fracing) and, more fundamentally, by oil companies and land and mineral owners who employ the technology in pursuit of profits.

Here’s to fracking and to those who get rich by means of it. Our lives are richer because of them.

Image: David Biederman, based on data from the U.S. Energy Information Administration