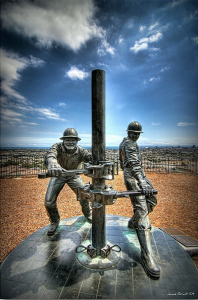 For decades in California, oil producers have successfully used hydraulic fracturing (fracking) to extract vast quantities of oil from the earth, and recent technological advances could unlock orders of magnitude more oil from California’s Monterey Shale. According to the Energy Information Administration (EIA), the shale may hold 15.4 billion barrels of oil, twice the total estimated oil in Texas’s Eagle Ford Shale and North Dakota’s Bakken combined.

Unfortunately, that potential has riled the state's powerful anti-industry groups, which have successfully disrupted development of much of this oil—their success being due largely to the fact that the federal government controls much of the land in question.

In April, in response to a lawsuit by the Center for Biological Diversity and the Sierra Club, the Federal Bureau of Land Management (BLM) halted an oil company’s plans to develop 2,500 acres it had leased in 2011. Despite the fact that tens of thousands of wells have been safely drilled and fracked in the United States in the past few years, a federal judge barred any drilling on the 2011 leases and required another environmental review, which would also be subject to litigation. (The plaintiffs had requested that the government cancel the leases entirely.)

This month, fearing expensive subsequent litigation, the BLM postponed two auctions involving the possible lease of 3,300 acres in California to oil explorers. BLM spokesman David Christy said, “The agency is concentrating its limited resources on enforcement on existing leases and other priorities, such as granting renewable energy permits.” The result is that these “public” lands are now closed to oil and gas development. . . .

View all articles by David Biederman →
Letter to the Editor
Investment in Fracking Results in Dramatic Production Growth Across Seven StatesDr. Jane Wright Has Died, But Her Work Will Forever Save Lives
Return to Top