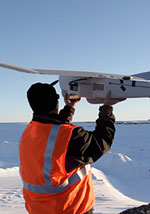 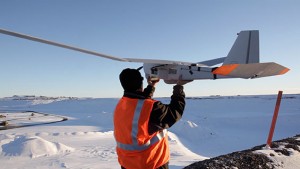 BP launched a thirteen pound drone earlier this month in Prudhoe Bay, Alaska, the “first authorized commercial operation by an unmanned aircraft over land in the United States,” reports the Anchorage Daily News.

BP turned to a drone (i.e., an unmanned aerial vehicle)—specifically, the Puma AE from AeroVironment—to improve monitoring of operations in the enormous and hazardous arctic environment of northern Alaska. BP “plans to use it to survey more than 200 miles of gravel road, well pads, a gravel pit and the 1,300 miles of pipelines,” the News reports.

The Prudhoe Bay oilfield is the largest in North America, with a geographic area of nearly a quarter-million acres. Floods, ice breakups, and ice floes continuously alter the topography, making other methods of monitoring the area dangerous, expensive, and time consuming.

BP’s drone is no mere camera in the sky; as the News reports:

The addition of LiDAR technology—remote sensors that use laser pulses to create 3D images—allows the drone to "paint" high-resolution maps of the ground from 200 feet up, said Curt Smith, BP's technology director.

Smith told the paper that, whereas BP ground crews spend up to a week checking a two mile section of pipeline, "The Puma can do a two-mile section in 30 minutes and it's much, much cheaper.”

Thanks to this new drone technology, BP’s employees will be able to conduct their work more safely and more cost effectively, illustrating once again how researchers and businessmen improve human life in their pursuit of profits.