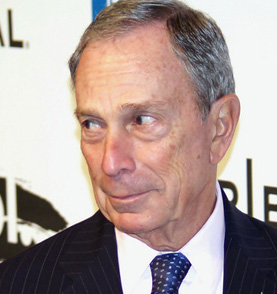 The Atlantic lauds New York City’s Mayor Bloomberg for pushing his ban on large sodas, selecting him as one of their "brave thinkers" of 2012. They cite Bloomberg’s lack of concern for approval as evidence of his bravery, especially given that “the New York Times' polling showed that the idea has been rejected by every demographic group in the city and every political persuasion.” Earth to The Atlantic: Forcing one’s ideas on people is not bravery; it is tyranny.

For his part, Bloomberg seems slightly less confused than The Atlantic is about the nature of his actions. He explicitly cites his use of force in defense of his measures: “We’re not taking away anybody’s right to do things, we’re simply forcing you to understand that you have to make the conscious decision to go from one cup to another cup.” Bloomberg did not proceed to address the pressing question of how it is that forcing individuals and businesses to act against their own judgment is not “taking away their right to do things.” But, hey, he’s a busy guy.

Given that The Atlantic is treating him as a hero for engaging in such rights-violating evasions, perhaps by next Thanksgiving Bloomberg will have banned second helpings of turkey and stuffing.

We New Yorkers and Americans who value our vanishing freedoms should not only condemn Bloomberg for his acts of tyranny; we should also condemn The Atlantic for asininely praising it (as Scott Whitlock does for Newsbusters).

With mainstream media like this, who needs The Nation or Mother Jones.

View all articles by Joshua Shnayer →
The Crucial Distinction Between Subsidies and Tax CutsDoes Reason Support a Carbon Tax?
Return to Top