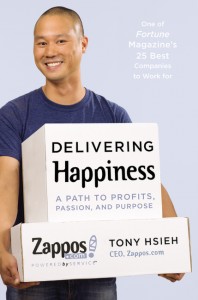 In July of 2009, right after celebrating his company’s ten-year anniversary, Tony Hsieh stood in a packed room. Seven hundred Zappos employees were cheering, and a “lot of them even had tears of happiness streaming down their faces” (p. 1). Hsieh had just surprised his employees with a special bonus after announcing the sale of Zappos to Amazon for $1.2 billion. Amazingly, this was the second time in just over ten years that Hsieh had sold a company for what amounted to roughly $100 million for each year he ran the business. But this second sale was a far happier occasion.

In the autobiographical Delivering Happiness: A Path to Profits, Passion, and Purpose, Hsieh tells how he set out as a kid “to become the number one worm seller in the world,” ran a successful button business (among others) in elementary school, and eventually achieved happiness—while delivering it—through Zappos, an online shoe store.

Hsieh starts by recounting a childhood spent searching for different ways to make money, observing what worked, and gaining many important lessons about business—his goal being to make enough money to do whatever he wanted when he grew up.

Upon graduating from university, and after a short stint at Oracle, Hsieh put his mounting knowledge to use in a company called LinkExchange, which he started with a friend, Sanjay. “The idea behind LinkExchange,” says Hsieh, “was pretty simple.”

If you ran a Web site, then you could sign up for our service for free. Upon signing up, you would insert some special code into your Web pages, which would cause banner ads to start showing up on your web site automatically.

The value that LinkExchange offered to websites was immediately recognized, and the network grew at a breathtaking pace. Working around the clock, Hsieh and Sanjay answered e-mails and programmed. Only five months into the business, they were in a position to debate selling their company for $1 million—an offer they ultimately refused. . . .

View all articles by Daniel Wahl →
Letter to the Editor
Review: The Extra 2%, by Jonah KeriReview: My Lucky Life In and Out of Show Business, by Dick Van Dyke
Return to Top