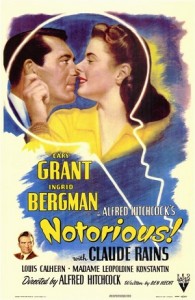 To stop a Nazi plot, an American agent pimps the woman he loves to a dangerous Nazi. This is the premise of the drama and thriller Notorious, one of director Alfred Hitchcock’s best films. Written by celebrated screenwriter Ben Hecht, Notorious was released in 1946 and stars Cary Grant as U.S. agent Devlin, Ingrid Bergman as the daughter of Nazi Alicia Huberman, and Claude Rains as Nazi Alex Sebastian.

What lifts Notorious above the level of good thriller is the lead characters’ internal conflicts and the story’s ironic suspense. To set these up, Hitchcock masterfully establishes the characters’ premises and problems to create a situation that he will play throughout the film.

The story opens in Miami, where Alicia’s father, a Nazi spy, is sentenced to twenty years in jail. Alicia, a good-time girl and alcoholic, marks the occasion with a party, where she meets and is attracted to the handsome Devlin. Their mutual attraction stalls when Devlin reveals he is an American agent. After Alicia sobers up, the mission-dedicated Devlin asks her to help him bust a gang of Nazis in Brazil, but angry about his earlier deceit she refuses. After Devlin reveals evidence of Alicia’s patriotism, she agrees to help stop the Nazis. . . .