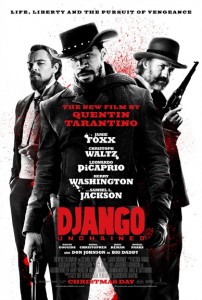 Imagine you’re a slave in the American South in 1858. In an attempt to escape the brutality and horror of that “life,” you and your beloved wife flee from your “owner”—but you are both captured. Your wife is beaten savagely while you are forced to watch. You are then sold separately. You later are purchased out of slavery and have an opportunity not only to free your wife, but also to exact revenge. This is the situation the lead character faces in Django Unchained (“the ‘D’ is silent”).

Quentin Tarantino’s film is one part romantic rescue, one part friendship, and two parts bloody revenge. When dealing with the romance and the friendship, the film is moving, even beautiful. When dealing with the revenge, the film is a bloody spectacle typical of Tarantino—and the gratuitous blood and gore are what keep Django Unchained from joining the ranks of the classics. . . .

View all articles by Ari Armstrong →
Letter to the Editor
Review: LincolnReview: The Intouchables
Return to Top