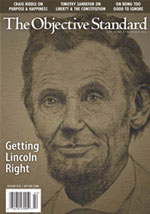 Summer Issue of The Objective Standard 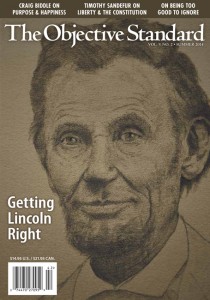 The print edition of the Summer issue of The Objective Standard is at press and will be mailed shortly. The electronic versions—including online (html), ebook, audio, and Kindle—will be posted on May 20. (Special thanks to Daniel Wahl for his excellent rendering of Abraham Lincoln for the cover of this issue.)

The contents of the Summer issue are:

Getting Lincoln Right
Alexander V. Marriott
Addresses various claims of Lincoln-bashing libertarians and conservatives; presents crucial and oft-ignored facts about Lincoln, about the Founders he revered, about the state of the Union during his time, and about the Civil War; and provides the context necessary to judge Lincoln and his actions objectively.

Purpose, Value Hierarchies, and Happiness
Craig Biddle
Zeros in on the nature and importance of purpose in good living, discusses how to organize and prioritize your values and goals with respect to their relative importance to your life and happiness, and offers tips and standing orders for making your life the best it can be.

Timothy Sandefur on the Conscience of the Constitution
Interviewed by Ari Armstrong
Discusses the essential purpose of the Constitution, the crucial role of the principles set forth in the Declaration of Independence in understanding that purpose, Sandefur's work at the Pacific Legal Foundation, and related matters.

So Good They Can’t Ignore You: Why Skills Trump Passion in the Quest for Work You Love, by Cal Newport
Reviewed by Daniel Wahl

Should Government Force Walgreens to Employ Salespeople Who Refuse to Sell Its Products?
Natalie Ogle

The Pope and the Root of Social Evil
Ari Armstrong

The National Day of Prayer versus Fidelity to Reason
Ari Armstrong

Republicans and the Immorality of Minimum Wage Laws
Stephen Bourque

If you’ve not yet subscribed to the quarterly, you can do so here. Also, we now offer gift certificates, which can be used toward subscriptions, renewals, single issues, or single articles. These make great graduation gifts for your active-minded friends and relatives.