The Winter 2012–13 Issue of The Objective Standard 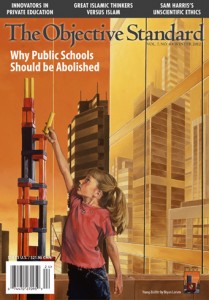 The Winter issue of TOS is at press and will be mailed shortly. The e-book and audio versions will be posted by December 25 and 30 respectively. The Kindle edition will be delivered on December 30.

The contents of the Winter issue are:

“The New Abolitionism: Why Education Emancipation is the Moral Imperative of Our Time,” by C. Bradley Thompson

Interviews with Innovators in Private Education

The One World Schoolhouse: Education Reimagined, by Salman Khan (reviewed by Daniel Wahl)

Let Them In: The Case for Open Borders, by Jason L. Riley (reviewed by Kevin Douglas)

The Dictator’s Learning Curve: Inside the Global Battle for Democracy, by William J. Dobson (reviewed by Daniel Wahl)

From TOS Blog
From the Editor
Letters and Replies

If you’ve not yet subscribed to TOS, you can do so here. The journal also makes a great Christmas gift for your active-minded friends and relatives. Subscriptions start at just $29 and are available in Print, Online, E-book, and Audio editions. Subscribe / Give Gifts

View all articles by TOS Admin →
Time for the Ethics of Organ Donation to Catch Up with the Heroics of Dr. Joseph E. MurrayGovernment Destroys Buckyballs, Assaults the Mind
Return to Top