Fall Issue of The Objective Standard 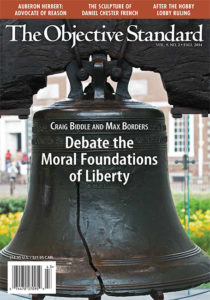 The print edition of the Fall issue of The Objective Standard is at press and will be mailed shortly; the online (html), ebook, and Kindle editions have been published; and the audio edition will be posted on August 28 (my apology for the delay on the audio).

Enjoy the issue, and be sure to let your friends know about the journal for people of reason.

DEPARTMENTS
From the Editor
Letters to the Editor

FEATURES
Moral Diversity: Asset or Liability for Liberty?
A Debate between Craig Biddle and Max Borders
As the pro-liberty movement across America (and the world) continues to expand—especially among college students and young adults—and as more and more intellectuals, pundits, and politicians grapple with the ideas associated with the movement, the importance of identifying and upholding the moral foundations of liberty becomes increasingly clear. Is liberty morally correct? If so, why? What exactly is the moral case for it? Is there more than one moral case for it? Is each argument for freedom equally sound, equally observation-based, equally noncontradictory? Do moral objectivity and logical consistency even matter in defense of liberty—and are they possible? Such questions, and the corresponding answers supplied by advocates of liberty, will determine the future of freedom in America and across the globe. Thus, it is vitally important that we who care about liberty get the answers right.

In May, at a conference cosponsored by The Foundation for Economic Education (FEE) and the Clemson Institute for the Study of Capitalism (CISC), Craig Biddle and Max Borders debated the question, “Moral diversity: asset or liability for the liberty movement?”—and the discussion was, by all accounts, profoundly interesting. We present here the transcript of that debate, which the moderator, C. Bradley Thompson (director of CISC) calls “the model of what a debate ought to be and what a serious, high-minded conversation should be.” More »

“Daniel Chester French was an American Beaux-Arts sculptor. Trained in Florence and later Paris, he was inspired by the ideal beauty of Greco-Roman art and architecture early in his career. In fact, he didn’t even stay around for the unveiling of the Minute Man sculpture in Concord, Massachusetts, in 1874, because he had accepted an invitation from the prominent American neoclassical sculptor Hiram Powers to stay with his family in Florence and study sculpture with another American artist, Thomas Ball. The artist looked to nature in modeling his figurative works but improved upon her in the classical tradition. Allegory and symbolism also played a more important role in his sculpture, especially when he memorialized individuals without portraying them in a realistic manner. . . .” More »

The Rape of the Masters: How Political Correctness Sabotages Art, by Roger Kimball
Reviewed by Daniel Wahl

The Martian, by Andy Weir
Reviewed by Ari Armstrong

Lincoln versus the “Monstrous Injustice of Slavery”
Ari Armstrong

The California Murderer’s “Selfishness Without a Self”
Ari Armstrong

On the Right Not to Bake a Cake
Ari Armstrong

After Hobby Lobby Ruling, How About Government Protect the Rights of Everyone?
Ari Armstrong

Myths and Facts about a Rights-Respecting Immigration Policy
Ari Armstrong

If you’ve not yet subscribed to The Objective Standard, you can do so here. The journal also makes a great gift for your active-minded friends and relatives. Subscriptions start at just $29 and are available in Print, Online, Ebook, and Audio editions.

Enjoy the issue, let us know what you think about the articles, and have a joy-filled fall!