The Summer Issue of The Objective Standard 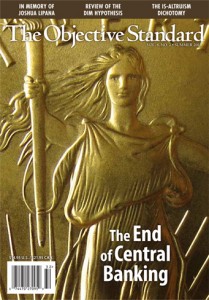 The Intouchables, written by Olivier Nakache and Eric Toledano
Reviewed by Ari Armstrong

The Sessions, directed by Ben Lewin
Reviewed by Ari Armstrong

The DIM Hypothesis: Why the Lights of the West Are Going Out, by Leonard Peikoff
Reviewed by Ari Armstrong

Righteous Indignation: Excuse Me While I Save the World, by Andrew Breitbart
Reviewed by Robert Begley

The Year of Living Biblically: One Man’s Humble Quest to Follow the Bible as Literally as Possible, by A. J. Jacobs
Reviewed by Daniel Wahl

The Truth about Gun Control, by David B. Kopel
Reviewed by Ari Armstrong

After the Welfare State, edited by Tom G. Palmer
Reviewed by Ari Armstrong

The Fruits of Capitalism Are All Around Us
Ari Armstrong

Skunk Works to Deliver “Energy for Everyone”
Howard Roerig

Legislation Should be Based on Individual Rights, not Group Averages
Ari Armstrong

Contra Joseph Levine, Israel is a Legitimate State (the Only One in the Region)
Joseph England

The Conflict Over Standardized Testing Is a Consequence of Government-Run Schools
Michael A. LaFerrara

“There Are no Values” through Islam
Ari Armstrong

If you’ve not yet subscribed to TOS, you can do so here.

The journal makes a Great Graduation Gift. Subscriptions start at just $29 and are available in Print, Online, E-book, and Audio editions.

Enjoy the issue and your summer—and be sure to let your friends know about the journal for people of reason!

View all articles by TOS Admin →
Shale Gas Is Plentiful; Freedom to Produce It Is NotScientists Advance Toward Genetically Perfect Replacements for Diseased Cells
Return to Top