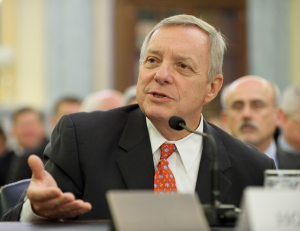 It is not often that a United States senator goes to the floor of the Senate to take on an author whose major works were published decades ago. But that is what happened yesterday when majority whip Dick Durbin criticized Republicans for reading Ayn Rand’s work, the most famous of which, Atlas Shrugged, was published in 1957. What is it about Rand and her ideas that Durbin finds so threatening? In his words:

I say to my conservative friends, put down those Ayn Rand books for a minute and take a look at the real world. If we can’t stand behind those who are struggling in life, who are we; what are we? Helping to reduce poverty in America will help us all. Work with us to help America. Please start off by extending unemployment insurance.

Regarding the problems with rights-violating government unemployment “insurance,” see my article from yesterday. Regarding Durbin’s broader attack on Rand, what, specifically, does he oppose in Rand’s ideas? He does not say, but the answer is obvious enough.

Rand demonstrated that each individual has a moral right to live for his own sake and by his own judgment—which means (among other things) that he may spend his money as he judges best and trade freely with others—and that the proper purpose of government is to protect each individual’s right to do so.

In Durbin’s version of the “real world,” there are no rights; government may use force as it sees fit. If government wishes to forcibly seize your wealth to help “those who are struggling in life” (or anyone else), it may do so.

As they make obvious every day, neither today’s leading Democrats nor Republicans have any substantial understanding of rights, much less any commitment to them. The problem with today’s Republicans is not that they can’t put down Rand’s books; rather, the problem is that, although some Republicans have read Rand’s books, few have mustered the courage to embrace the fundamental ideas in Rand’s works—for instance, the principle that that reason is man’s only means of knowledge (meaning faith is invalid), and the principle that rational self-interest is moral (meaning self-sacrifice is not). These are the kinds of fundamental ideas in Rand’s philosophy that give rise to and support her defense of freedom and capitalism.

To establish a government that consistently protects the rights of each individual, what Democrats and Republicans alike need is not only to pick up Rand’s books, but to read them, understand them, recognize the fundamental truths in them, and put those truths into political practice.