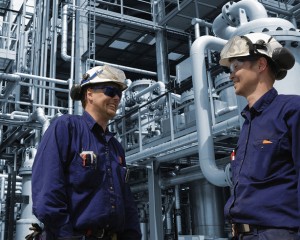 Low energy costs and abundant petrochemical materials made possible by those working in horizontal drilling and hydraulic fracturing (fracking) have made the United States one of the least expensive places for chemical manufacturing on the planet.

[M]anufacturers can make ethylene [a primary petrochemical building block used in many resins, plastics, and industrial chemicals] in the United States for less than half of what it costs in Europe, Asia, and Latin America.

This advantage has not gone unnoticed.

The American Chemistry Council (ACC) estimates that, through early December 2013, “over 135 new chemical production projects, valued at $90 billion,” are underway in the United States, with half the funds coming from foreign firms.

One company attracted to the U.S. market is the world's largest producer of methanol, Methanex Corporation, in Vancouver, BC Canada. Methanex is disassembling two of its plants in Chile, shipping them across the Atlantic Ocean and up the Mississippi River, and rebuilding them in Geismar, Louisiana. The first facility will be online by the end of 2014, with the second starting up in early 2016. The plants will employ 2,500 construction workers initially and 165 people long term.

South African-based Sasol is in the early engineering and design phases of two Louisiana projects expected to cost upwards of $21 billion—making the investment the “largest single manufacturing investment in the history of Louisiana” and “one of the largest foreign direct investment manufacturing projects in the history of the United States,” according to Sasol. The investment will finance the construction of the first U.S. facility to chemically convert natural gas into diesel fuel, as well as a world-scale “ethane cracker” facility to produce ethylene.

Asia’s largest chemical producer, Formosa Plastics Group, is also expanding its U.S. operations, seeking permits for a $2 billion expansion in Texas. Susan Wang, vice chair of the company, said, “Because of shale gas, the cost of making petrochemical and plastic-related products is becoming very competitive here in the United States,” and “probably as cost effective as in the Middle East.”

And Saudi Basic Industries Corporation—the world’s largest petrochemical manufacturer by market share—expects to announce a deal to invest in a U.S. petrochemical project by next year. Company CEO Mohamed Al Mady said, “Our strategy is to expand production by utilising the most feasible feedstock [raw materials] we have at the moment, and that is U.S. gas.”

Kevin Swift, ACC’s chief economist, said the low-cost gas products resulting from the shale revolution is “the greatest thing that's happened in this industry in 75 or 80 years, going back to when nylon was developed.”

Frackers have turned America once again into a land of opportunity. Let’s encourage Americans to recognize the life-serving nature of these great producers—and to demand that government leave them free to produce.