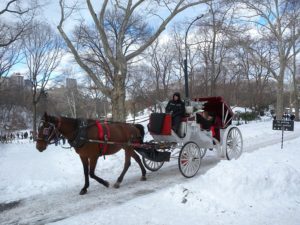 New York City’s new mayor, Bill de Blasio, did not wait to assume his office before brandishing the big stick of government force. Two days before becoming mayor, de Blasio threatened to outlaw horse-drawn carriages in Central Park. For half a century, these carriages have attracted New Yorkers and visitors wishing to enjoy the marvels of the bustling Empire City from a charming, pastoral perspective.

To them—and to those whose livelihoods depend on the horse-drawn carriages—the mayor-elect had a message:

“We are going to get rid of the horse carriages. Period,” de Blasio, who [took] office New Year’s Day, said at a news conference. . . . “They are not humane, they are not appropriate for the year 2014. It’s over. So, just watch us do it.”

The pretext for the ban is that using horses in this manner abuses them, as they must breathe exhaust fumes and risk being struck by automobiles. But this is nonsense. First, horses don’t have rights; their owners do. Second, the horses are exposed to no more risks than are the carriage drivers and passengers (or for that matter, pedestrians in Manhattan).

For years, New Yorkers have been burdened by the capricious applications of government force by former mayor Michael Bloomberg, who (among other things) banned smoking and trans-fats and sought to forcibly reduce salt consumption, to limit the size of soft drinks, and even to force builders to reduce the functionality of their elevators to promote stair use.

Mayor de Blasio’s out-of-the-gate assault on those who drive and enjoy horse-drawn carriages in New York City is an ominous sign that the rights-violating trend will continue.