The Meaning of Obama’s Government “Investments” 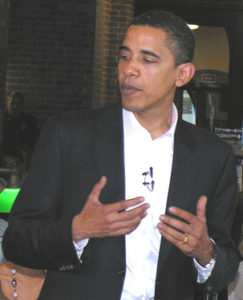 A recent Washington Post article clarifies the meaning and purpose of Barack Obama’s government “investments.” As the paper reports, Obama has showered select citizens of Ohio with tax dollars and special privileges, helping them receive a grant for a “manufacturing center,” large tax credits for allegedly “clean energy,” and “the largest loan in the history of the U.S. Small Business Administration.” (The loan went to a manufacturer of ricotta cheese.)

Why is Obama showering certain Ohioans with government goodies? He explained, “If we win Toledo, we will win Ohio. And if we win Ohio, we’ll win this election.”

In other words, Obama forcibly confiscates the wealth of some in order to buy the political support of others so that he can remain in office and further destroy America.

The only things the U.S. government has a moral right to “invest” in are the functions of government that protect individual rights, such as the courts, police, military. That Obama can get away with using taxpayer money to effectively bribe citizens to keep him in power indicates how far this once profoundly moral nation has strayed from its founding principles.

View all articles by Ari Armstrong →
Letter to the Editor
Objective Standard Mini-Conference, DallasThe Question that Matters in this Presidential Election
Return to Top