The Question that Matters in this Presidential Election 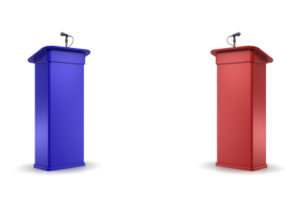 A recent article from the Denver Post reveals the central problem with the modern clash between Democrats and Republicans: While both parties seek to protect individual rights in some ways, both seek to violate rights in other ways.

"So my feeling is: Do I vote for who might be best for the country economically, or for who I agree with and is open-minded socially? I don't know," Antikainen said.

Many voters feel the same angst regarding a variety of issues. Republicans tend to support, if only in rhetoric, freer markets (in some areas), lower taxes, restrained government spending, and less regulation. Democrats tend to support abortion rights, the rights of gay couples to marry, people’s rights to buy and use drugs of their choice, rights of peaceable immigrants to move where they want, and rights of businessmen to hire immigrants.

Craig Biddle offers a powerful case that, this time, voting for the Republican in the presidential race is the best way to slow the progression toward statism, yet it is understandable that many liberty-minded voters struggle with the decision. The best we can hope for is to slow the slide to statism enough that we’re able to spread the moral case for capitalism, change the cultural attitude toward genuine freedom, and thus set the stage for a consistently rights-respecting candidate in the future.

The question that matters in this presidential election is: Which candidate will do less damage and thus buy us more time?

View all articles by Ari Armstrong →
The Meaning of Obama’s Government “Investments”“Trickle Down Government”: Obama’s Economic Vision
Return to Top