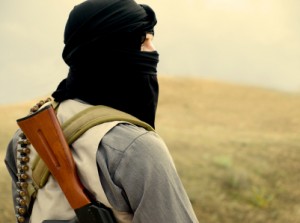 Islamists commit so many atrocities—from slaughtering Americans and Israelis, to murdering homosexuals and Christians, to disfiguring and murdering women, to raping and mutilating little girls—that one can become lackadaisical about the countless related stories that stream past us on the internet and television every day.

But once in awhile we ought to pause and remember just how brutally vicious Islamists are. A recent murder in Afghanistan was caught on tape—it shows a member of the Taliban shooting nine rifle rounds into the back of a kneeling woman, as men stand around chanting, “God is great!” Her “crime”? Reportedly, she was having an affair (whether she was, and, if so, whether it was by choice or by force, we’ll never know).

Ideas matter. People who embrace the murderous, Islamist ideology continue to commit routine atrocities—most of which are never reported or captured on video—precisely because their ideology demands that they do.

People in the Middle East who wish to move toward civilization must start by repudiating the poisonous ideology of Islam. We in the West who love our lives must condemn that ideology as the primitive, faith-based, rights-violating philosophy that it is, and we must embrace and promote a philosophy of reason and individual rights.