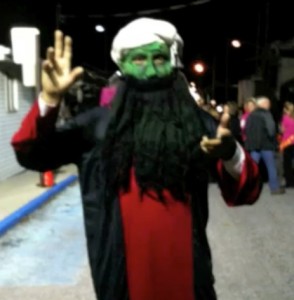 A free society recognizes the right of each person to profess his beliefs—no matter how controversial—so long as he does not physically harm (or threaten) others or their property. The government of a free society stops and criminally charges anyone who forcibly interferes with another’s free expression.

But last Halloween when atheist Ernie Perce marched in a Pennsylvania parade as “Zombie Mohammed,” Muslim Talaag Elbayomy physically confronted Perce. When a judge heard the resulting harassment charge against Elbayomy, the judge did not focus on the alleged attack; instead, he castigated the atheist for “offending” the Muslim.

As law professor Eugene Volokh discusses, whether the evidence against Elbayomy was sufficient to warrant criminal charges is not the matter of concern here.

Law professor Jonathan Turley criticized the judge’s remarks and published a lengthy excerpt from the hearing. Reportedly, after calling Perce a “doofus,” the judge said:

I think our forefathers intended to use the First Amendment so we can speak with our mind, not to piss off other people and cultures—which is what you did. . . .

For a U.S. judge to cite Sharia law (i.e., death for blasphemy) in a U.S. court, to claim that Perce’s expression was not protected by the First Amendment because it was “offensive” to Muslims, and to invoke a make-believe “right” not to be offended, is morally and legally obscene.

If anyone was still wondering whether American culture and law are being eroded by the West’s refusal to call Islam the evil that it is, this case should be clarifying. Those who care about the future of America must denounce Sharia law, Muslims who advocate it, and Westerners who tolerate it. And we must defend the principle of individual rights—including the right of free expression—as a moral and legal absolute.

Addendum (February 28, 6:30 pm MT): Mr. Perce called me by phone earlier today. He wished me to clarify that he is "Ernie Perce the 5th." He also verified approval of TOS's use of the image in the post. Finally, he informed me that there have been death threats directed against both him and the judge. So I will take this opportunity to condemn in the strongest possible terms any threats against any party associated with this case. —Ari Armstrong

View all articles by Ari Armstrong →
Letter to the Editor
Iran Speeding Up Nuclear Work; Solution Remains the SameJason Calacanis Nails It
Return to Top