An Islamist 'Declaration Against Terrorism' 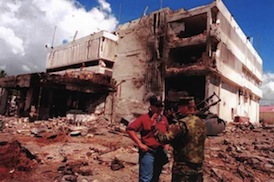 In the "question" period of my recent talk at Georgia Tech, a student's fifteen-minute monologue included the claim that a recent Islamic conference in India had condemned terrorism—and that the western press had ignored this conference.

MEMRI covered the conference, which was attended by some ten thousand clerics, scholars and teachers. The "declaration against terrorism" issued by the conference included the following:

This All India Anti-Terrorism Conference, attended by the representatives of all Muslim schools of thought, organised by Rabta Madaris Islamiah Arabia (The Islamic Madrasas Association) Darul Uloom Deoband, condemns all kinds of violence and terrorism in the strongest possible terms.

The Conference expresses its deep concern and agony [over] the alarming global and national conditions [presently prevailing in the world], in which most of the nations are adopting an attitude against their citizens—especially the Muslims—that cannot be justified in any way, in order to appease the tyrant and colonial master of the West.

This last means the United States. The conference was a typical anti-American gathering.  Predictably, the declaration went on to decry the oppression of Muslims inside India:

Now the situation has worsened [to such an extent] that every Indian Muslim—especially those associated with madrasas, who are innocent with good record of character—are always gripped by the fear that they might be trapped by the administrative machinery anytime.

How should this "grip of fear" by Muslims be ended? The declaration demands that the Indian government shift the fear onto anyone criticizing Islam, by forcibly banning freedom of speech for critics of Islam:

This conference strongly demands that the Indian Government curb those maligning the madrasas and Muslims. The administrative machinery should be [required] to conduct impartial investigations into activities [of] disturbing public peace in the country, and to punish only those found guilty. . . . This All India Anti-Terrorism Conference [calls on] all intellectuals, writers and [journalists] to analyze the national and international affairs independently and honestly, and [to] avoid biased and partial attitudes.

"Disturbing the public peace" and displaying a "biased and partial attitude" includes saying and writing anything critical of ("maligning") the teachings of the Islamic schools. "They" (meaning "all intellectuals, writers and journalists") must "render full support to the Islamic madrasas . . .  following the Islamic Shariah and teachings with full confidence."

The declaration is not a condemnation of terrorism. It is a call to implement Islamic law over every aspect of human thought and action, and to prosecute anyone critical of Islam.

Is this is the best example that the critic in my audience could come up with for a condemnation of terrorism by Muslims?

View all articles by John David Lewis →
Free Speech vs. McCain and CompanyRational ‘Strings’ are Good Things
Return to Top