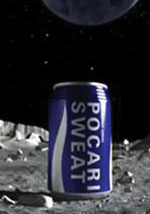 In Praise of Those Commercializing the Moon

A consortium of space entrepreneurs plans next year to deliver to the moon’s surface a can of Pocari Sweat, an Asian sports drink. Yes, they’re doing it for the money—and that is a glorious thing. Astroscale reports:

Singapore based international commercial space enterprise, ASTROSCALE has contracted with Astrobotic Technology, a US based company that delivers space robotics technology and planetary missions, to deliver a payload to the lunar surface on its October 2015 mission. Through this unmanned space mission, ASTROSCALE’s payload will deliver POCARI SWEAT, Japan’s leading health drink manufactured by Otsuka Pharmaceutical to the moon, setting the record of world’s first commercial beverage to land on the moon surface.

This is no ordinary can of sports drink. In addition to a portion of the powdered drink (it comes in liquid as well), the can going to the moon also will contain “120 titanium plates [that] will be laser-engraved with handwritten dreams submitted by children in Asia and around the globe,” reports Tech in Asia. Nobu Okada, Astroscale’s CEO, “hopes that one of those children will someday journey to the moon and open the capsule.” Part of the purpose of the mission, then, is to inspire students to pursue careers in space exploration.

Further, by successfully landing a craft on the moon, the space companies involved would “claim the multi-million dollar bounty offered by Google's Lunar X competition,” The Independent reports. The prize is worth at least $20 million, depending on goals reached.

But not everyone is pleased with this commercialization of the moon. As The Telegraph puts the matter, “they’ll be dumping what some will view as trash on the lunar surface.” And Stephen Luntz IFL Science claims the “plan to put a can of Pocari Sweat on the lunar surface may make people as queasy as the name of the drink.” (He says Pocari Sweat is “rumored” to be paying half a million dollars for the delivery.)

But the notion that a hi-tech can on the moon’s surface constitutes “trash”—in a barren wasteland where no one has walked since 1972—is beyond ludicrous, as is the notion that people should feel “queasy” about paid sponsorships for moon exploration. We should not feel “queasy” about this any more than we do about sponsorships or advertisements for computers, telephones, medical equipment, automobiles, or any of the other hi-tech products we use daily.

The proper, rational response to such an announcement is to praise those pursuing these great values, and to long for the day when lunar colonists are so successful that the moon is spotted with landfills.