“Christianity is Only the Second Worst Evil in Western History? I Agree.” 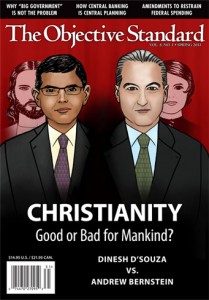 Here's a taste of the full transcript of the debate between Dinesh D'Souza and Andrew Bernstein, “Christianity: Good or Bad for Mankind?” which will be published in the forthcoming (Spring) issue of The Objective Standard.

“If Mr. D’Souza’s argument is, ‘Well, the Communists and the Nazis murdered more people than the Christians,’ what conclusion do we come to from that—Christianity is only the second worst evil in Western history? I agree. I absolutely agree. And I win the debate. Because the debate is, is Christianity good or bad for mankind; and Mr. D’Souza and I have established, Christianity is the second worst evil in human history.” —Andrew Bernstein

The debate is laden with such gems—and the journal is at press, so if you’re not yet a subscriber, subscribe today and ensure receipt of your copy.

Also in the Spring issue: “The End of Central Banking, Part I” by Richard M. Salsman; “Why ‘Big Government’ is Not the Problem” by Eric Daniels; an interview with Robert G. Natelson on “State-Driven Amendments to Restrain Federal Spending”; plus movie reviews, book reviews, letters to the editor, and much more.

Subscriptions to TOS start at just $29 (that’s 8¢ a day!), and all subscriptions provide full access to six years' worth of in-depth articles and reviews from an Objectivist perspective. Philosophic journalism of this scope and calibre is not available anywhere else at any price. Subscribe now. It’s rocket fuel for the intellect.

View all articles by TOS Admin →
Letter to the Editor
More Evidence of the Failure of Government Schools (and the Solution)Introduction to “The End of Central Banking, Part I” by Richard M. Salsman
Return to Top