More Evidence of the Failure of Government Schools (and the Solution) 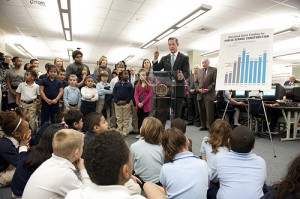 In his TOS article “The New Abolitionism: Why Education Emancipation is the Moral Imperative of our Time,” C. Bradley Thompson argues that the “‘public’ [i.e., government] school system is the most immoral and corrupt institution in the United States of America today, and it should be abolished.” Those not yet persuaded by his thesis should consider a few of the recent headlines regarding the government schools:

Although a few horror stories do not by themselves prove that government-run schools are inherently corrupt, Thompson argues that such problems often arise because of the nature of the schools. To remain in existence, government schools force parents to finance the schools and to send their children to the schools; accordingly, the schools are not accountable to parents or students or anyone—except the government, of which the schools are a part. Because government schools exist by means of force and are thus unaccountable, such schools tend to produce incompetence in teachers, administrators, students, and everyone else involved, and sometimes shockingly immoral behaviors by teachers and students.

The alternative to the coercion and corruption of government schools is a free market in education, in which businessmen, educators, and parents decide what they will offer, how they will teach, and where they will and will not send their children for education. Although a free market would not end every problem in education, it would empower those who use and finance schools to reward competent and healthy schools and withdraw their support from incompetent and corrupt ones. Observe that most private schools today offer a much better education than do the government schools.

In education, as in all other areas of life, the moral is the practical—respecting people’s rights to control their businesses, their careers, their their wealth, and their children’s education would promote great schools that educate students and prepare them for successful living.

View all articles by Ari Armstrong →
Minimum Wage Laws: Economically Harmful Because Immoral“Christianity is Only the Second Worst Evil in Western History? I Agree.”
Return to Top