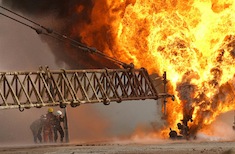 One argument made for a Republican vote in this election—and the support it will bring to President Bush—is that Bush has the right foreign policy aims in mind; he errs only in their pursuit. If we would just give him the support he needs, he will correct his errors—thus speak his apologists.

Well, some 3,000 Americans have died in Iraq and Afghanistan, and over 10,000 have been maimed. Until those apologists raise the dead and restore lost limbs, the "errors" remain uncorrectable.

Bush has had nearly four years to watch this horrendous destruction of our youth—and to understand its purpose, and its cause. But the more body bags and stretchers come home, and the more our position deteriorates, the more he demands we "stay the course." What course? The good of the Iraqis, which trumps all other considerations.

This is not error. This is the intentional, ongoing, committed sacrifice of our young people to foreign strangers. This is evil.

Please spare me the rejoinder that Iraq is a "small war" next to World War II, and that we lost 12,500 dead and over 50,00 wounded at Okinawa alone. The war is not small to that 25 year old soldier who wanted to protect his country, but ended up losing his legs for the Iraqis. It is the purpose of the war—sacrifice on behalf of others—that makes it evil, not the body count.

The withdrawal of support for the Iraq war by the American people is a healthy response to this sacrificial carnage. It is their recognition, even though implicit, that that the Iraqis have no claim on the lives of our young people. Most Americans, who are value-seekers rather than value-destroyers, do not like sacrifice. The vast majority of Americans support their troops, want them to win, and to come home safe. But these Americans do not confuse their brave young soldiers with the commander in chief who is sacrificing them on an altar built by others.

One blogger has had the courage to say this—Diana Hsieh.

View all articles by John David Lewis →
Insulting Our Soldiers vs. Sacrificing ThemProperty and Principle: A Review Essay on Bernard H. Siegan’s Economic Liberties and the Constitution
Return to Top