The NFL: An Analogy for Government’s Proper Role in the Marketplace? 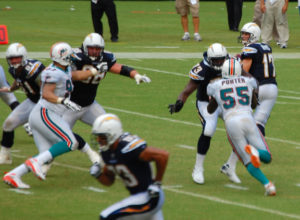 In defense of government regulation of the economy, NewsCompanion.com writer Stephen Hiltner writes:

Sports, in general, provides a fine analogy for what government’s role should ideally be. The athletes and their teams, motivated to beat the competition, bring to their game the same energy and creativity that entrepreneurs and businesses bring to the marketplace. But though the players and coaches may dispute a call now and then, they don’t make the mistake of perceiving regulation as the enemy. Rather, a good game requires clear rules and regulations that are fairly applied.

Referring to what he terms “the anti-government movement,” Hiltner continues:

Ideologies that equate regulation with tyranny, common in political discourse, sound bizarre when applied to the realm of sports. You don’t hear athletes quoting Ayn Rand and calling for the elimination of referees and boundaries in the name of freedom.

Hiltner is attacking a strawman. The issue is not rules vs. no rules. All human associations need rules of some kind or other. The issue is who creates them and how they are implemented. There is a clear moral distinction between a private institution voluntarily instituting its own internal rules of conduct, and a government stepping outside of its only legitimate role as a the protector of individual rights and coercively regulating the behavior of private citizens.

Hiltner’s specific example, the National Football League, is a private association of individuals bound together by voluntary contractual arrangements among all participants—players, coaches, referees, fans, union, team owners. The NFL cannot force its rules or “regulations” on anyone who doesn’t voluntarily join the organization and agree to abide by its rules.

The government, in contrast, is an institution with a legal monopoly on the use of physical force. When unconstrained by rights-based constitutional limitations, it can and does forcibly impose regulations on individuals, businesses, and industries. Government regulations are illegitimate laws; thus they can never be “fairly applied.” The very fact that they are forced on unwilling people and their associations—a situation that does not apply to the NFL—makes them decisively unfair.

The logical lesson to draw from Hiltner’s sports analogy regarding government’s role is the precise opposite of the lesson he purports to draw. By all means, uphold the NFL as the analogy for the entire marketplace; not because every one of its rules is necessarily good, but because everyone involved is free to choose his associations, free to participate or not, free to act on his own best judgment.

Like the NFL, every individual and business should be free to adopt his or its own rules, standards, or procedures in an environment of legal protection of individual rights (including property rights), an environment in which everyone—whether management, employees, customers, suppliers, investors, or anyone else—is free to contract with others by mutual consent to mutual advantage, without government interference. The government’s only proper role in such an environment is to step in when rights are violated, and even then only to remedy the situation and step back out.

Rational opponents of government regulation do not oppose rules as such. We believe that, like the NFL, those rules should be drawn in the private sector through voluntary, contractual arrangements. Nor are we “anti-government.” We believe that government has a vital role to play in preserving a free society—namely, to establish objective laws that protect individual rights by barring physical force and fraud from social relationships. In short, our position is not anti-government, but anti-tyranny.