Gay Marriage: The Right to Voluntary Contract, Not to Coercive “Contract” 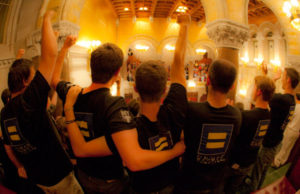 The targets of the complaint, Robert and Cynthia Gifford, owners of Liberty Ridge Farm and opponents of gay marriage, refused to host Erwin and McCarthy’s wedding, citing religious freedom as justification.

Every individual has a right to live by his own moral standards, even irrational ones, so long as his actions don’t violate the rights of others. But this issue is not primarily about freedom of religion and conscience; rather, it is about freedom of association and contract.

Erwin and McCarthy claim that Liberty Ridge is in violation of NY law, which forbids a business that serves the public to discriminate on the basis of sexual orientation. But the inalienable rights of gays to forge a marriage contract does not include the right to force others to do business with them. It is just as wrong for Erwin and McCarthy to impose their values on the Giffords by forcing them to host gay weddings as it was for the government to impose the Giffords’ standards on gays by legally banning gay marriage.

As a private business, Liberty Ridge has a right to choose its associations and to contract with customers on voluntary, mutually agreed terms. Freedom of contract means not only the right to voluntarily contract with others, but also to refrain from doing so for whatever reason or even no reason. The Giffords’ refusal to host gay wedding ceremonies does not violate the rights of gays, who are free to take their business elsewhere (as the couple said they would do).

Laws banning private discrimination contradict the proper purpose of government, which is to protect individual rights—including contract rights, marriage and business transactions alike—equally and at all times. The government’s proper role is to enforce the terms of voluntary contracts and to mediate contractual disputes or remedy breaches of contract. It has no legitimate role forcing anyone into contractual arrangements against his will.

View all articles by Michael A. LaFerrara →
Evolution is Scientific Fact, Not a “Lie from Hell”The Left’s False Alternative on Health Care
Return to Top