Message to Gov. Christie and His Critics: Gay Marriage is a Moral Right 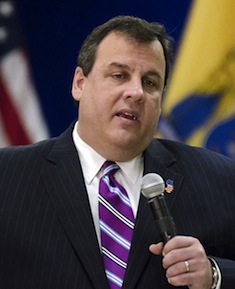 New Jersey Governor Chris Christie ignited a political furor when he vowed to veto a bill recently introduced in the state legislature legalizing gay marriage because he believed the issue should be decided by popular vote through a public referendum. In so doing, he said "I think people would have been happy to have a referendum on civil rights rather than fighting and dying in the streets in the South." (Christie has since apologized for that remark.)

The backlash was swift. Said NJ Assembly Speaker Sheila Oliver (D-Essex): "Governor — people … were fighting and dying in the streets of the South because the majority refused to grant minorities equal rights by any method. It took legislative action to bring justice to all Americans, just as legislative action is the right way to bring marriage equality to all New Jerseyans."

"People of color in the American South,” lectured civil rights leader Rep. John Lewis (D-Ga.), “...could not register to vote... take a seat in the front of the bus [or] visit state capitals. If it had been put to a referendum, we would have never ever won"; only “congressional actions, court decisions and presidential executive orders” made victory possible.

And as the NJ Star-Ledger pointed out: “Imagine how different American history would be if this rule by referendums had carried the day from the start. … [M]inority rights should not be subjected to majority vote. That misses the gist of constitutional rights.”

The governor’s critics are correct, up to a point: Rights are not a matter of voter approval. But nor are they a matter of legislative approval, court order, or executive order. The right of individuals to freely contract with one other, so long as their contracts and actions don’t involve the violation of others’ rights, is a moral matter, which precedes politics and legislation.

Should the bill pass, the NJ legislature in fact will not have created a right to gay marriage; rather, it will have removed NJ’s ban on the practice, thus recognizing that same sex couples have an inalienable right to join together under a marriage contract.

View all articles by Michael A. LaFerrara →
The Key to Eating and Acting Without RegretIsrael Should Obliterate the Iranian Regime
Return to Top