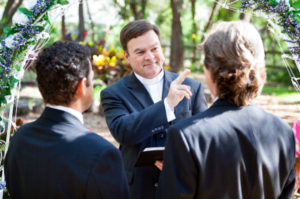 Catholic Archbishop John J. Myers has issued a pastoral statement declaring that the legalization of gay marriage would threaten religious freedom. In fact, however, the archbishop’s claim is a threat to religious freedom.

America has a secular government that is supposed to protect every individual's rights to free association and contract, equally and at all times, regardless of one’s gender or sexual preference. The Catholic Church, as a private institution, is free to condemn and reject gay marriage, but it has no right to infringe on the rights of homosexuals to contract as they see fit.

Myers' declaration is particularly galling in light of the Church's ongoing efforts to overturn the Obama administration's birth control mandate. The Church’s hypocrisy is hard to miss. The plaintiffs in that suit rightly object that "the mandate forces religious employers to provide contraceptive and sterilization services to employees that violate their beliefs"—yet the Church believes it has a right to violate non-Catholic and non-religious people's beliefs by legally forbidding gay marriage.

Freedom of religion means freedom not only to practice religion but also to be free from the imposition of others' religious beliefs. The Catholic Church's fight to keep gay marriage illegal violates this principle and the First Amendment's Establishment and Free Exercise Clauses by attempting to impose its religious dogma on everyone else.

View all articles by Michael A. LaFerrara →
Letter to the Editor
“Trickle Down Government”: Obama’s Economic VisionWhen Politics Corrupts Money
Return to Top