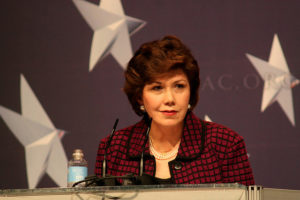 Two cases before the U.S. Supreme Court—separate challenges to California’s Proposition 8 and the federal Defense of Marriage Act (DOMA)—could lead to a momentous decision on gay marriage. But there are indications that the court may sidestep the broader issue of whether gay marriage is a constitutional right, and instead decide the two cases on narrow grounds. Linda Chavez, former Department of Labor secretary, urges the Court to take the narrower approach.

In a New York Post op-ed, Chavez argues that "this issue has moral and social ramifications, which have not been fully explored much less resolved. I think the only way to [resolve the gay marriage issue] is through open political debate." Noting that, historically, "all societies have insisted that marriage entail at least one male and one female," she concludes:

The Supreme Court would do well not to throw out 2,000 years of tradition in one fell swoop. A better . . . approach would be to recognize the right of states to determine marriage qualifications by striking down those provisions of DOMA that contradict that principle, but also to hold off on recognizing marriage as a constitutional right.

Let the states decide who can and cannot marry. . . . Social mores evolve over time—but they should not be mandated by fiat by nine men and women.

But gay marriage is not a matter of tradition, states "rights," or popular will. It is a matter of individual rights.

Marriage is a contract, which consenting adults have a right to voluntarily and freely engage in. Freedom of contract, a form of association, is a right just as freedom of speech or religion is a right. All such rights are rooted in the individual's right to life, the foundation of all rights, and, as stated in the Declaration of Independence, these rights are inalienable.

People have a moral right to ascribe to their marriages whatever moral or religious tenets they wish and act accordingly, so long as their actions do not infringe on the rights of others. The government, as a protector of individual rights, should be neutral on the matter, merely enforcing marriage contracts of all couples, regardless of gender.

The Supreme Court should recognize the need of governmental neutrality and throw out all laws banning or restricting gay marriage. This would not be a fiat mandate of nine men and women. It would be the Supreme Court upholding the overarching principle of America: the principle of individual rights.

[Editor’s note: Legislation enabling gay marriage should include provisions to ensure that existing contracts, such as those between employers and employees, are not retroactively altered in ways contrary to the intentions of the parties who entered into them. But this is a technical legal matter that can easily be worked out by Congress. —Craig Biddle]

View all articles by Michael A. LaFerrara →
Stockton Ain’t All that’s BankruptWhy "Sacrifice" Means Loss, Not Gain
Return to Top