Iran Calls Yet Again for Annihilation of Israel 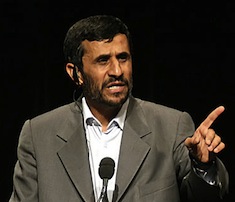 Iranian President Mahmoud Ahmadinejad has called yet again for the “annihilation of the Zionist regime”—that is, the nation of Israel. What threat is posed by the regime over which this madman presides? As Craig Biddle notes:

[T]he Islamist regime in Iran is sponsoring the slaughter of American soldiers in Iraq and Afghanistan, funding Hamas and Hezbollah in their efforts to destroy our vital ally Israel, building nuclear bombs to further “Allah’s” ends, chanting “Death to America! Death to Israel!” in Friday prayers and political parades, and declaring: “With the destruction of these two evil countries, the world will become free of oppression.”

Meanwhile, libertarian “thinkers” at the Cato Institute have this to say:

Israeli Prime Minister Benjamin Netanyahu has claimed that Hezbollah—the Lebanon-based, Iranian-backed, politico-military terrorist organization–was responsible for the suicide bombing in Bulgaria that killed five Israeli tourists. Amid ongoing U.S. and Israeli threats to strike Iran's nuclear facilities, the bombing raises a critical concern about any potential conflict: a very capable Hezbollah, together with Iran, would likely strike back hard—and not only in the Middle East—drawing the United States into another prolonged and bloody conflict in the Muslim world that it doesn't need.

In other words, goes this argument, because genocidal Islamists are so powerful now, Israel and the United States should sit back and let Iran build nuclear bombs undeterred. What will these Islamists do once they have nuclear bombs at their disposal? Best not to “think” about that.

Those who do not wish for America to engage in suicidal appeasement should heed the warning of the late great John David Lewis:

The power of the Islamic Totalitarians grows every day that we wait. The strategic balance will shift—the Islamic Totalitarians will have the capacity as well as the will to bring about the nuclear Armageddon that they so deeply crave—if Iran acquires nuclear bombs. It is not a kindness to wait, knowing that our response will have to be even more lethal after a mushroom cloud rises over American soil. To wait, in light of that knowledge, is irrational—criminally irrational.

View all articles by Ari Armstrong →
Letter to the Editor
Obama’s Way vs. The American WayUnderstanding Obama: It’s Not the Economy, Stupid!
Return to Top