The High Muckety-Muck (HMM) of Iran sent President Bush an 18 page letter this week, doubtless with very tiny writing, in which he wrote:

Liberalism and Western style democracy have not been able to help realize the ideals of humanity. Today these two concepts have failed. Those with insight can already hear the sounds of the shattering and fall of the ideology and thoughts of the liberal democratic systems.

Translation: in the war we are fighting, you in the west will be defeated, and we Iranians will win, because you have failed to help others. 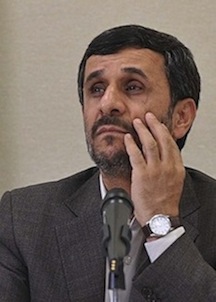 One of HMM's chief platoons in the war is Hamas, a terrorist group that receives religious, moral and economic support from Iran, and now has a base of operations in the Gaza. Without Iran, Hamas—and the war—would not last long. So what have American leaders done about this?

This week, Secretary of State Rice convened a meeting with Russia, the UN Secretary-General, and Europeans, to discuss the resumption of economic payments to Hamas. Rice said that their goal was "to provide assistance to the Palestinian people so that they do not suffer deprivation and do not suffer an humanitarian crisis." In other words, the Secretary took HMM up on his challenge to send him money.

Caroline Glick has exposed this forcefully as a flight from reality: http://www.jewishworldreview.com/0506/glick051106.php3