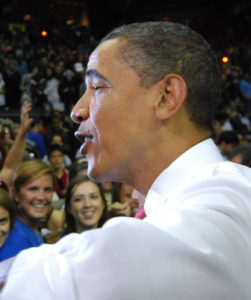 President Obama can’t stop talking about the 1 percent of people who he says don’t pay their fair share of the nation’s taxes. But he should be obsessing about a 1.5 percent — the rotten growth rate produced by the once-mighty US economy in the second quarter.

Yet the president either doesn’t know or doesn’t care that the country is headed right back into recession territory. He’s too busy bashing Mitt Romney’s record at Bain Capital to address what increasingly looks to be unfolding economic calamity.

The key to understanding Obama’s political machinations is understanding his philosophical motivations. When he said he would “fundamentally transform America,” he meant it.

Obama is driven by a collectivist ideology that stands in perfect opposition to America’s individualist Founding ideals. In a speech in early 2008, Obama laid down the principles that would govern his presidency:

In the end, then, what is called for is nothing more, and nothing less, than what all the world’s great religions demand—that we do unto others as we would have them do unto us. Let us be our brother’s keeper, Scripture tells us. Let us be our sister’s keeper. Let us find that common stake we all have in one another, and let our politics reflect that spirit as well.

Obama couldn’t have been clearer about his intentions. He said he wanted to establish as a political policy the biblical principle that we are our brother’s keeper; the American people liked the idea; they elected him; and now he’s implementing the policy.

Why is it that so many Americans liked this idea before it was implemented but, now, after seeing the statist consequences of its implementation, see Obama’s policies as anti-American? Because so many Americans embrace a contradiction: They want, as Craig Biddle puts it, to uphold both “the ethics of self-sacrifice” and “the politics of self-interest.” But these are logically incompatible. You simply can’t have both. And, of the two, the ethics is more fundamental and thus determines the outcome of the conflict.

Obama has raised altruism to a new level in American politics, implementing the “ideal” as clearly and consistently as is politically possible since the day he was inaugurated—right up to and including his assault on the “top 1 percent.”

Obama, with his unrelenting vision of a collectivist America, has long understood this. If advocates of liberty want to win this battle, they must grasp it as well. As a political sloganeer might put it: It’s not the economy but the morality, stupid!