The Israeli Freedom Movement Stands Against Leftists on May Day 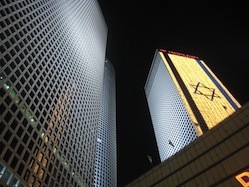 The Israeli Freedom Movement (aka the New Liberal Movement), led a counter protest against leftist organizations celebrating May Day.

Boaz Arad a founder of the IFM, was quoted in Israel National News, saying, “We came here to commemorate more than 100 million victims of the socialistic agenda in the 20th century. . . . This is the forgotten Holocaust which we, as Jews, should remember and remind others about.” Tomer Tal, another counter protester said, “This is not right, because one hundred million people died because of communism.” Michael Jaffe, also with the IFM, said, “There is almost a utopian perspective of socialism and communism that simply leaves out the basic premise that it is the negation of the individual and is the negation of individual liberties... the freedom of thought... the freedom of the marketplace for people to enter into consensual contracts without government interference...”

Not surprisingly, leftists cursed at and shouted down the counter protesters, telling them to “Go back to Auchwitz,” and “It’s too bad you weren’t killed in the Holocaust.”

Aside from the leftists’ predictable reaction, the IFM protesters received a lot of positive feedback. As Boaz told me, “our message is new to many people, and considered as a strong answer to the left’s arguments.”

Hats off to Boaz and the Israeli Freedom Movement for promoting freedom and for opposing those who celebrate totalitarianism.

Here are a few brief interviews with some of the pro-freedom protesters:

View all articles by Joshua Lipana →
“Occupier” Thug Clubs A Female Cop Over the HeadSteve Jobs, Willy Wonka, and Good Reason for a Torrent of Expletives
Return to Top