ObamaCare and the Statists’ False Alternative 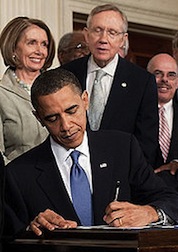 In 1984, then-Colorado Governor Dick Lamm infamously said, “We've got a duty to die and get out of the way with all of our machines and artificial hearts and everything else like that and let the other society, our kids, build a reasonable life.” Though Lamm has long claimed that he was misrepresented, recent news of 71 year-old Dick Cheney’s heart transplant prompted Lamm to tell NJ Star-Ledger columnist Paul Mulshine:

The mere fact that a 70-plus senior citizen can get the government to pay for such an expensive operation shows why Medicare is going broke… Health care is a fiscal black hole into which you can pour all of a society’s resources. . . . I think age should be a consideration in health care. . . . How many heart transplants can we afford?

The necessity of rationing, as Paul Hsieh notes, is inherent in any system of government-run health care—including ObamaCare, which contains the legal seeds of complete government control. Lamm, not surprisingly, enthusiastically supports rationing.

What happens when government rations health care? Look at the United Kingdom.

Britain’s Macmillan Cancer Support reports that “every year [in Britain] many thousands of older people are routinely denied life-saving NHS treatments because their doctors write them off as too old to treat.” This is what awaits America’s seniors as the federal government consolidates control of Americans’ health care under ObamaCare. As David Catron warns, “the purpose of IPAB [ObamaCare’s “Independent Payment Advisory Board”] is to ration care to the elderly,” and “the inspiration for IPAB was the very [British] bureaucracy responsible for denying care to [Britain’s elderly] patients.”

Lamm and his fellow statists offer a false alternative: national bankruptcy or health care rationing. The moral alternative to both—the alternative that recognizes the individual’s moral right to act and trade in accordance with his own judgment—is a free market.

View all articles by Michael A. LaFerrara →
Stop the Fracking ControlsFEE Video with Scott Beaulier on Economic Freedom in Africa
Return to Top