Obama’s “Cruel Disregard” for the Sick—and the Well 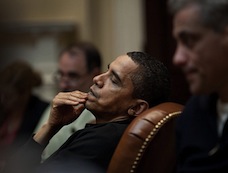 A recent decision by the 9th U.S. Circuit Court of Appeals made an end-run around an existing ban on compensation for most bone marrow donations. In light of new technology enabling the extraction of bone marrow cells from blood, the court ruled that “marrow cells taken from a donor's blood were blood parts, not organ parts,” thus the existing ban on compensation for organ donations doesn’t apply. As James Stacey Taylor of the College of New Jersey notes, this greatly increases the chance for "the thousands of children and adults whose lives depend on receiving a transplant of bone marrow" to access the life-giving procedure.

If you think such a life-saving court decision is uncontroversial, however, think again. Taylor explains that “in an unbelievable twist,”

the Obama administration is urging that this case be reheard and the ruling overturned. The administration argues that allowing payment for bone marrow would privilege the wealthy at the expense of the poor and sick, as well as undermine Congress’ "clear policy of encouraging voluntary bone marrow donations." Not only are these arguments wholly out of touch with how people receive their health care in America, they also show a cruel disregard for the plight of those desperately needing bone marrow.

In what way does a mother compensating a bone marrow donor with her own money in order to save the life of her child (or herself) "privilege the wealthy at the expense of the poor and sick?" She is using her own resources in a mutually beneficial contract with a willing donor—a contract in which both parties have a moral right to engage. She is no more harming the poor and sick by doing this than she would be by purchasing a hamburger.

And not only the “wealthy” benefit when rights are respected; everyone benefits, including the so-called “poor.” Citing MoreMarrowDonors.org compensation guidelines, Taylor indicates that a poor person able and willing to donate bone marrow could receive as much as $3000 per donation--an obvious benefit to him if he needs the money and wants to make the trade. A poor person might also need a bone marrow transplant—and if compensation for donations is legal, then not only will there be a dramatic increase in donors, making more bone marrow available, there will also be a market for charities dedicated to collecting bone marrow and making it available at a discount or for free to those who otherwise could not afford it.

Might that be a benefit to a poor person who would otherwise die? As Taylor notes, "To let people die to satisfy the ideological commitments of people in Washington is horribly and appallingly wrong."

Although Taylor doesn’t name it, the "ideological commitment" motivating Obama is the bloody doctrine of altruism: the notion that being moral consists in self-sacrificially serving others. This is what gave rise to the federal law banning payment of any kind for organ donations in the first place. As Craig Biddle wrote in addressing the broader law prohibiting compensation for organ donations:

The widespread acceptance of altruism (the fallacious notion that being moral consists in self-sacrificially serving others) causes continuous human suffering and death. ... [It] has convinced Americans that it is better for some people to suffer and die than it would be for others to donate organs for a profit. Profit is plainly selfish; thus, according to altruism, it would sully the whole “beautiful” altruistic “ideal” of people giving away organs for free.

To effectively fight Obama and his altruistic cohorts who would rather see some people die than other people profit, Americans must condemn the morality of altruism and uphold the morality of egoism, the virtue of profit, and the principle of individual rights.

View all articles by Michael A. LaFerrara →
Letter to the Editor
Why Greece’s and America’s Economies StinkPope Immorally Condemns “Artificial Fertility”
Return to Top