The Fall 2012 Issue of The Objective Standard 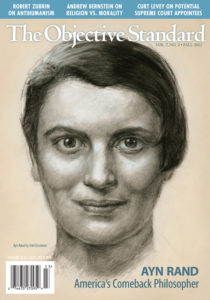 The Fall 2012 issue of TOS has been posted to our website. The print edition is at press and will be mailed shortly. The e-book and audio versions will be posted on September 25 and 30 respectively.

Highlights the essential principles of Rand’s philosophy; compares them to the essentials of the predominant philosophies of the day, religion and subjectivism; relates each to the American ideal of individual rights and liberty; and shows why, if America is to make a comeback, Americans must embrace Rand’s ideas.

Surveys the history and tenets of religion and shows that religion, in every essential respect, is utterly at odds with the requirements of a rational, practical, life-serving morality.

The Role of Religion in the Scientific Revolution
Frederick Seiler

Takes to task claims that religion was somehow responsible for the profound scientific advancements that animated the 16th and 17th centuries, and shows that the cause of these advancements was not religion or faith but the partial freeing of the mind from religious restrictions and the consequent use of observation and logic.

Robert Zubrin on the Scourge of Antihumanism
Interviewed by Ari Armstrong

Mr. Zubrin discusses the history and scourge of antihumanism.

FROM TOS BLOG (a new section in the quarterly)

The Financial Crisis and the Free Market Cure: Why Pure Capitalism is the World Economy’s Only Hope by John Allison
Reviewed by Ari Armstrong

Merchants of Despair: Radical Environmentalists, Criminal Pseudo-Scientists, and the Fatal Cult of Antihumanism by Robert Zubrin
Reviewed by Ted Gray

Ameritopia: The Unmaking of America by Mark R. Levin
Reviewed by Michael A. LaFerrara

The Locavore’s Dilemma: In Praise of the 10,000-mile Diet by Pierre Desrochers and Hiroko Shimizu
Reviewed by Andrew Brannan

The Secret Lives of Codebreakers: The Men and Women Who Cracked the Enigma Code at Bletchley Park by Sinclair McKay
Reviewed by Daniel Wahl

Double Cross: The True Story of The D-Day Spies by Ben Macintyre
Reviewed by Daniel Wahl

If you’ve not yet subscribed to TOS, you can do so here. The journal also makes a great gift for your active-minded friends and relatives. Subscriptions start at just $29 and are available in Print, Online, E-book, and Audio editions, so you and your gift recipients can enjoy the articles as you see fit.