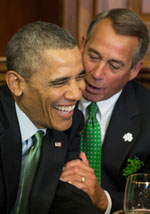 What Congress Should Do Rather than Sue 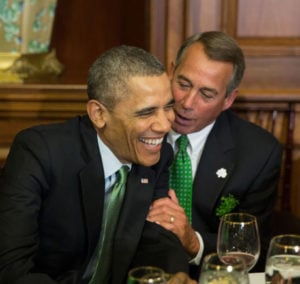 That Barack Obama flouted the law that informally bears his name, ObamaCare, is clear. Twice, in July 2013 and again in February of this year, the Treasury Department—an agency that includes the Internal Revenue Service and whose secretary the president appoints—delayed implementing ObamaCare’s so-called “employer mandate,” a provision forcing businesses to provide their employees with government-approved health insurance or else face fines.

The Constitution clearly grants to Congress “all legislative powers,” including the “power to lay and collect taxes,” and it clearly directs the president to “take care that the laws be faithfully executed.” Obviously the president is not authorized to rewrite laws by whim. (For details, see Peter Suderman’s article on the subject.)

Unfortunately, this week’s response by House Republicans—to sue Obama—demonstrates that they are more interested in poking the President than in defunding and ultimately repealing the rights-violating laws that are throttling the ability of doctors, insurers, and patients to act according to their reasoned judgment. (At most, such a lawsuit, which is likely to go nowhere, should be a sidelight to more significant actions.)

Congress has the power to repeal ObamaCare and to begin rolling back government controls of health care. For example, Congress could not only repeal the rights-violating mandates that force individuals to purchase insurance and employers to provide it; Congress could also put an end to the use of the tax code to punish people for purchasing insurance directly.

Congress should turn its efforts from poking Obama with a lawsuit to undoing ObamaCare with actions that are fully within Congress’s power.