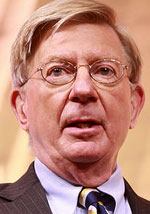 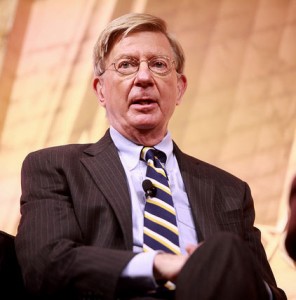 In a recent discussion with Juan Williams on Fox News, George Will destroyed the arguments in favor of Common Core education standards:

This is the thin end of an enormous wedge of federal power that will be wielded for the constant progressive purpose of concentrating power in Washington so that it can impose continental solutions to problems nationwide.

You say it’s voluntary. It has been driven by the use of bribes and coercion, in the form of waivers from No Child Left Behind, or Race to the Top money, to buy the compliance of these 45 states (two of which . . . have already backed out). . . .

What are the chances . . . that we’re going to have five or six creative governors experimenting with different curricula, or one creative, constant, permanent Washington bureaucracy, overlooking our education?

We’ve had fifty years . . . of federal involvement that has coincided with stagnation in test scores across the country.

Bravo to Will for his poignant critique of Common Core.

But Will does not see the full implications of his remarks. What are the chances, we should further ask, that governors and state-level politicians and bureaucrats—few of whom have a background in education and all of whom are motivated by political aims—will creatively and intelligently “experiment” with curricula that best meet the needs of the many thousands or millions of students in their states? What are the chances that politicians and bureaucrats at the local level will do the same?

The questions Will does not ask are these: By what right are politicians and bureaucrats in charge of education? And who is more likely to achieve an education that actually works for students: politicians and bureaucrats at any level, who force children to attend their schools and force parents to finance those schools—or parents working cooperatively with private educators, all of whom retain the freedom to control their wealth and property according to their judgment and to contract (or not) by choice?

View all articles by Ari Armstrong →
Thank Goodness Few Religionists Are as Religious as Franklin GrahamTwo Paradoxes of Capitalism, Resolved
Return to Top