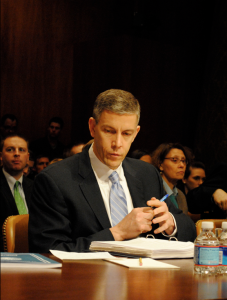 The U.S. government is increasingly seizing control of elementary and secondary education, and all Americans who care about education should be up in arms.

The federal government is rapidly expanding its coercive reach by means of a program called Common Core, a set of government-issued educational standards in language and mathematics. Common Core effectively imposes a uniform, nationwide, government-approved curriculum for students from kindergarten through high school. Forty-five states plus the District of Columbia have adopted the standards, which are set to take effect next year.

Flush with $4.35 billion of taxpayers’ money from the 2009 “stimulus” bill, the Department of Education lured cash-strapped states to compete for shares of the booty. To win these grants, states had to agree to adopt the Common Core standards. In addition, the Obama administration is issuing conditional waivers to states that would otherwise be penalized next year for not meeting the Bush administration’s “No Child Left Behind” goals. The condition? The states must adopt the Common Core standards.

The Common Core standards dictate what will be taught in the classrooms—not in every detail, but in general. As a set of “standards,” they set the standard for content and thus dictate what is and is not permissible in curricula. Correspondingly, the federally funded organizations that create tests for nationwide educational assessment are now designing their tests to measure students’ knowledge of curricula that meet the Common Core standards.

There is no getting around the meaning of Common Core: The federal government is seizing control of what American children are being taught in government-run schools.

Although state and local governments have no moral right to control education, either, these mandates from Washington intensify the statist nature of government-run schools by adding coercion where it should be removed. The mandates do this not only by increasing the extent to which politicians and bureaucrats dictate curricula, but also by increasing the extent to which taxpayers are forced to fund the rights-violating monstrosity euphemistically called “public education.”

Americans concerned with moral rights and quality education should demand that their representatives (a) repeal the Common Core standards and (b) work to end all government involvement in education. The time for this revolution is now.