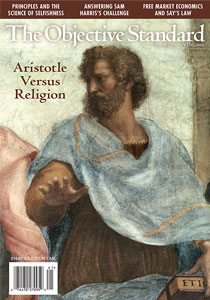 The Spring Issue of The Objective Standard 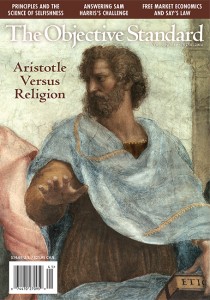 The print edition of the Spring issue of The Objective Standard goes to press today and will be mailed shortly. The electronic versions—including online (HTML), ebook, audio, and Kindle—will be posted by February 25. The contents of the Spring issue are:

A Peek at Thinking in Principles: The Science of Selfishness
Craig Biddle
Presents the introduction and first chapter of Biddle’s forthcoming book.

Aristotle Versus Religion
Andrew Bernstein
Offers a concise history of the relationships and conflicts between Aristotelianism and the three major monotheistic religions, Judaism, Christianity, and Islam; illustrates the varying degrees to which Western and Middle Eastern cultures accepted or rejected The Philosopher’s ideas and attempted to mix them with religion; shows the power of rational ideas to sustain and further human life and the power of irrational ideas to throttle and thwart it; and shows the importance of understanding that Aristotelianism is the root of all good in the world today and of fighting to expand recognition of this fact.

Answering Sam Harris’s “Moral Landscape Challenge”
Ari Armstrong
Addresses Harris’s public challenge: “Anyone who believes that my case for a scientific understanding of morality is mistaken is invited to prove it in 1,000 words or less. (You must address the central argument of the book—not peripheral issues.) The best response will be published on this website, and its author will receive $2,000. If any essay actually persuades me, however, its author will receive $20,000, and I will publicly recant my view.”

Responsibility & Luck: A Defense of Praise and Blame, by Diana Hsieh
Reviewed by Ari Armstrong

The Conscience of the Constitution: The Declaration of Independence and the Right to Liberty, by Timothy Sandefur
Reviewed by Slade Mendenhall

Janet Yellen: What You Should Know about the Next Fed Head
Richard M. Salsman

The Libertarian Case for Legalized Plunder
Craig Biddle
Listen to the audio recording.

Duck Dynasty and the Difference between Rights and Tolerance
Ari Armstrong

Jobs Celebrates Man Who Put a Dent in the Universe
Ari Armstrong
Listen to the audio recording.

“A Cause Greater Than Yourself”—In What Sense?
Ari Armstrong
Listen to the audio recording.
DEPARTMENTS

If you’ve not yet subscribed to The Objective Standard, you can do so here. The journal makes a great gift for your active-minded friends and relatives. Subscriptions start at just $29 and are available in Print, Online, Ebook, and Audio editions.

Enjoy the Spring issue—and be sure to let your friends know about the journal for people of reason.