Portable Ultrasound: “The Stethoscope of the 21st Century” 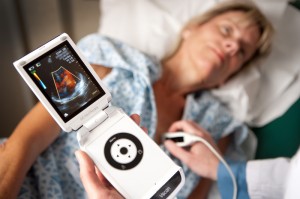 The stethoscope, invented some two-hundred years ago and long carried by doctors everywhere as standard gear, may soon be shelved. Some medical experts predict that the stethoscope will be widely replaced by portable ultrasound devices capable of delivering to doctors dramatically better information about patients.

Jagat Narula and Bret Nelson write in an editorial for the World Heart Federation:

At the time of this writing several manufacturers offer hand-held ultrasound machines slightly larger than a deck of cards, with technology and screens modelled after modern smartphones. . . . [M]any experts have argued that ultrasound has become the stethoscope of the 21st century. While few studies have pitted ultrasound head-to-head against the stethoscope, there is evidence that ultrasound is more accurate even than chest x-ray in the detection of pneumothorax [an air pocket that obstructs the lungs], pleural effusion [a similar fluid pocket], and perhaps even pneumonia. Ultrasound allows visualisation of cardiac valve function, contractility, and pericardial effusions with greater accuracy than listening with the stethoscope. And beyond the heart and lungs lie dozens of other organs and structures—well-described in the literature of point of care ultrasound—which are opaque to the abilities of the stethoscope.

Once again, researchers and entrepreneurs are replacing old technology with new to the great benefit of human life. Congratulations—and thank you—to the doctors, engineers, and businessmen working to make these portable ultrasound devices widely available.