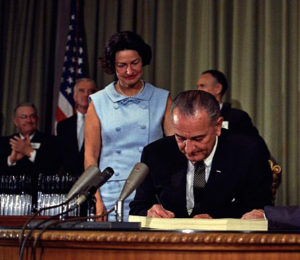 Although some conservatives claim to defend limited government and individual liberty, conservatives in fact fail to defend these values consistently. The reason is that conservatives share with their leftist “opponents” a commitment to the morality of self-sacrifice.

Take a recent example. In her article for the Heritage Foundation, “How to Fight Poverty—and Win,” Jennifer Marshall writes,

Sadly, the half-century legacy of [Lyndon Baines] Johnson’s Great Society has not lived up to that noble goal [of eliminating poverty]. . . .

Our responsibility to our neighbors in need demands more: a redirection of public policy and a commitment from each of us to do what we can in our own communities. . . .

[P]olicymakers can’t hide behind reams of programs and billions in spending and declare they’ve done their duty to the poor. (emphasis added)

Although Marshall proceeds to criticize “big government” poverty programs, she has conceded the moral ground that gives rise to such policies. If we have a “duty” to lift “our neighbors in need” or “the poor” out of “poverty,” how can we have a right to our liberty, property, and the pursuit of happiness?

This duty premise on the part of Republicans is why we see them feebly oppose spending on such programs, only to apologetically retreat in the face of criticism.

The issue is not whether one cares about or sympathizes with those who are struggling in life or living in poverty. Many Americans have struggled to pay the bills at one time or another; many have helped friends or family members through periods of hardship; and many have donated to charities. Moreover, in semi-free America, anyone who finds himself in poverty—with the exception of people with severe mental or physical disabilities—is able to work his way out of poverty if he chooses to do so.

The issue at hand has nothing to do with empathy or sympathy or caring for those in poverty. The issue at hand is a moral principle and a black-and-white alternative: Either a man’s life is his own, or he is duty-bound to live for others. As Ayn Rand put it,

If conservatives wish to fight for a government limited to its proper functions, they must come to see that the notion that people have a “duty” to serve “the needy” or their neighbors or “the poor” undermines that political goal. More fundamentally, they must come to see that the notion that morality requires self-sacrificial service to others is rationally indefensible—that there is, in fact, no such thing as a moral “duty” to serve others. More fundamentally still, they must come to see that being moral consists not in self-sacrificially serving others but in self-interestedly pursuing one’s life-serving values, respecting the rights of others to do the same, and enjoying the fruits of the production and trade that follow from the protection of each individual’s moral right to life, liberty, and the pursuit of happiness.

View all articles by Stephen Bourque →
Letter to the Editor
“A Cause Greater Than Yourself”—In What Sense?Portable Ultrasound: “The Stethoscope of the 21st Century”
Return to Top