Quent Cordair Offers a Philosophical Detection Story in “The Match” 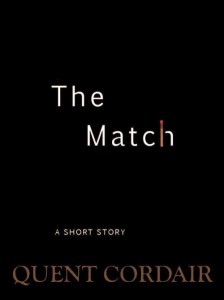 “‘Elizabeth,’ he cleared his throat, ‘there’s something I need to ask you.’ She stopped breathing. If this was the question, the timing was odd—but she didn’t care.” These lines set the tension in Quent Cordair’s latest short story, The Match.

Frank does not ask the question Elizabeth hoped for. Instead, he asks, “Elizabeth, do you remember how we met?” They met six months prior, when Frank, a detective, was investigating the death of a sheriff’s deputy. Although Frank and Elizabeth have been dating seriously since then, Frank has some unanswered questions about that old investigation, question that involve Elizabeth. And Elizabeth’s explanation of what happened on a cold and lonely night months ago fills most of Cordair’s story. So will Frank end up proposing to Elizabeth—or arresting her?

Obviously I can’t answer that question without spoiling the story. But, without giving away too much, I can say that the story involves Elizabeth and her daughter, her clunky old car, and a book of matches. I can also say that the story takes place in the near future, after the government has passed some laws of which Elizabeth disapproves.

Cordair spins an intriguing tale with a small cast of well-drawn and believable characters. And he manages to make an interesting and timely political point in the context of a police investigation and a love story.

As to what Elizabeth tells Frank, and as to what he does about it, you’ll have to read for yourself.