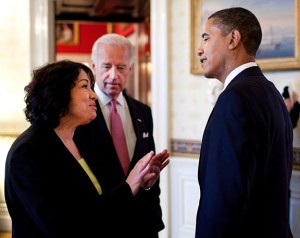 On the last day of 2013, Supreme Court justice Sonia Sotomayor temporarily blocked the ObamaCare provision “forcing some religious-affiliated groups to provide health insurance coverage of birth control,” the New York Times reports. But the debate as the media typically present it misses an essential point: The contraception mandate violates the rights of non-religious people, too.

Advocates of the mandate treat contraception as a right, which implies that some people must be forced to pay (in this case through insurance premiums) for contraception used by others. But there is no “right” to force people to provide you with goods or services. Rights pertain an individual’s proper freedom of action in a social context, not to a government-granted ability to seize people’s wealth.

Religious opponents of the mandate claim that forcing them to provide health insurance covering contraception violates their religious liberty—and they are right. People have a right to believe irrational things, such that a supernatural entity—for which there is no evidence and whose existence defies logic—forbids the use of contraceptives. People also have a right to act on their beliefs, so long as they do not violate the rights of others. Religious groups have a right to contract freely with individuals, which means (among other things) that they have a right not to offer or pay for insurance that covers contraception.

View all articles by Ari Armstrong →
Letter to the Editor
Happy New Year!Jobs Celebrates Man Who Put a Dent in the Universe
Return to Top