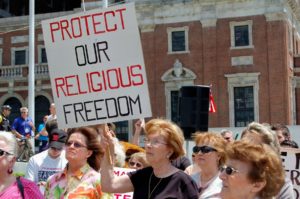 The proposed “compromise” consists of a range of administrative changes, but these tweaks hardly satisfy the religious opposition. As Fox News reports, one religious leader, Reverend Russell Moore, president of the Southern Baptists' public policy arm, ridiculed the compromise as “word games and accounting tricks.”

The religious coalition, Fox News reports, includes “leaders of the Roman Catholic church, the Southern Baptist Convention, the National Association of Evangelicals, [and] the Assemblies of God and the Lutheran Church-Missouri Synod, among others.” The coalition is calling on the Department of Health and Human Services (HHS) “to exempt ‘any organization or individual that has religious or moral objections’ to the so-called contraception mandate in ObamaCare.”

In an “open letter to all Americans,” the coalition points out the larger threat to liberty posed by the contraception mandate:

While the mandate is a specific offense, it represents a far greater breach of conscience by the federal government. Very simply, HHS is forcing citizen A, against his or her moral convictions, to purchase a product for citizen B. . . .

View all articles by Michael A. LaFerrara →
Letter to the Editor

“Objectively Speaking”—Tonight: “Steve Jobs the hero”New Essay by John David Lewis: “There is No ‘Right’ to Healthcare”
Return to Top