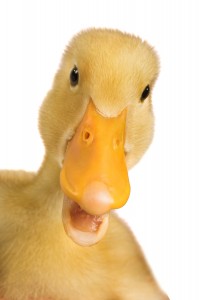 Duck Quacks premiered January 13 on National Geographic Channel, where two half-hour episodes air back to back on Mondays beginning at 10 PM. The show celebrates science via episodic competitions between the co-hosts to see who can present the most amazing scientific “facts.” But the facts—or, rather, hypotheses—are not just presented and explained. They’re also tested. Herein lies the big fun. 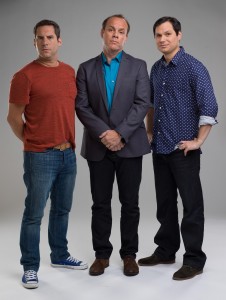 The foregoing queries and several more are tested in the first four episodes of Duck Quacks. (Some of the experiments in these first few episodes are arguably less than scientifically sound, but the primary purpose here is entertainment.)

Future episodes reportedly will test such queries as whether the color red really makes bulls angry, whether swearing can increase one’s tolerance for pain, whether attractive women can retard men's thinking, whether a bathing suit cap can be stretched so far that an adult can fit inside, whether when singing the same song choir members' heartbeats will synchronize, whether it’s possible to scale walls using vacuum cleaners, and much more.

At the end of each episode, the studio audience votes on which host presented the “most impressive, outrageous or interesting” facts, and “the winner takes home the coveted ‘Golden Quack’ trophy.”

The most crucial ingredient in the show, however, is the charisma, levity, and wit of the co-hosts: Tom Papa, Michael Ian Black, and Seth Herzog. These guys are pure fun.

Although I’m not familiar with the prior work of Black or Herzog, both men are clearly in their element here. Each shines. I am familiar with Papa, having discovered him a few months ago when my wife happened across his recent stand-up act, “Freaked Out” (which I’ll review later this week). Papa is a maverick comedian and a master entertainer, and his involvement in Duck Quacks not only made the first few episodes especially enjoyable; it also bodes well for the series going forward. My family and I eagerly await the next episode.

In these times of cultural relativism, religious mysticism, and political insanity, it’s good to see some reverence for reason, science, the mind. It’s even better to see it wrapped in benevolent hilarity. Tune in. Check it out. Let me know what you think.

(As to whether duck quacks echo, reportedly they do.)

View all articles by Craig Biddle →
“Dr. King Ended the Terror of Living in the South”“A Cause Greater Than Yourself”—In What Sense?
Return to Top