“A Cause Greater Than Yourself”—In What Sense? - The Objective Standard 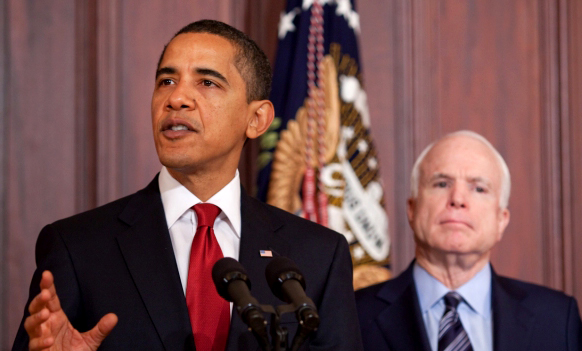 “A Cause Greater Than Yourself”—In What Sense? 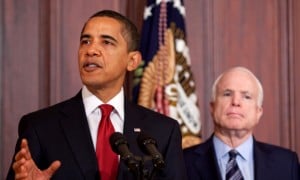 Consider what a few prominent public figures mean by the phrase.

It's only when you hitch your wagon to something larger than yourself that you realize your true potential and discover the role that you'll play in writing the next great chapter in the American story.

How do you “hitch your wagon to something larger than yourself”? By self-sacrificially serving that “something larger”—by giving up your personal, life-serving values for the sake of that alleged greater good. Such “change will not come easily,” explains Obama, “sacrifice will be required.”

Obama’s view is typical not only among those on the “progressive” left but also among conservatives. John McCain, for example, speaking on the topic of national service, says:

Those who claim their liberty but not their duty to the civilization that ensures it live a half-life, indulging their self-interest at the cost of their self-respect. The richest men and women possess nothing of real value if their lives have no greater object than themselves.

Success, wealth, celebrity gained and kept for private interest—these are small things. They make us comfortable, ease the way for our children, and purchase a fleeting regard for our lives, but not the self-respect that, in the end, matters most. Sacrifice for a cause greater than self-interest, however, and you invest your life with the eminence of that cause.

Similarly, Mitt Romney tells students of Coe College, “Get out of the shallow waters of selfishness and give yourself to causes greater than yourself. Launch yourself into the deep waters of great causes.”

Rather than coming out and directly saying that people have a moral duty to self-sacrificially serve others, who matter more than they do, Obama and company couch their calls to self-sacrifice in the vague and adventurous-sounding language of a “greater cause.” Why?

The answer is that sacrificing your personal, life-serving values for the sake of others is senseless, life-damaging, potentially life-destroying advice. We live and prosper by pursuing our values, not by sacrificing them. The call to sacrifice for a “cause greater than yourself” is intended to make self-sacrifice sound sensible and noble by making it seem as though sacrifice is about joining some grand and meaningful cause. It is not.

Obviously a person morally may join a cause that is “greater than” himself in the mundane sense that the cause involves additional people and resources, shared goals, and the like. In that sense, practically everything a person does is “greater than” just himself in that almost everything he does involves other people or other things. What matters in this context, however, is whether pursuing a cause advances your life and happiness or undermines those values. If “living for a cause greater than yourself” means sacrificing your life-serving values, then, on a rational, life-based morality, doing so is wrong.

Consider an example of a moral cause. If you take a job you love at a company you admire, you will work with others in the cause of producing goods and services you enjoy producing. Obviously, nothing is sacrificial about that; pursuing your career can and should be enormously rewarding, spiritually and financially.

Or consider the cause of raising one's children. Rational parents value their children enormously; recognize their children's well-being as essential to their own; and embrace their chosen responsibility of raising their children to be rational, successful, and happy adults. To raise their children well, parents must work with many other people, including grocers, educators, doctors, and so on.

Or consider a political cause. If you advocate a fully rights-protecting government, that’s good for your life; human beings survive by acting on their judgment to produce the things they need in order to live—and to do so they need the freedom to act. Although such a cause obviously involves working with or speaking to others (and is in that trivial sense “greater than” just you), it advances rather than undermines your life and happiness. It is not “greater than yourself” in the sense of taking precedence over your pursuit of your own life and happiness. Its aim is precisely to advance your life and happiness.

Ayn Rand, who famously defends “the virtue of selfishness” in her book of that title, fully recognizes that, in order to act in a rationally selfish way, you must engage with the physical world and other people in it to achieve your values—whether money, love, freedom, self-esteem, or whatever. In her essay “Causality Versus Duty,” Rand argues that the notion that you can have a “duty”—an unchosen obligation—to do anything is baseless. Proper morality, she argues, involves recognizing and enacting “the process by which an end determines the means; i.e., the process of choosing a goal and taking the actions necessary to achieve it.” Rand goes on to explain the importance of looking outward at the facts of reality, not inward toward some alleged duty, in order to achieve one’s values: “A disciple of causation looks outward, he is value-oriented and action oriented, which means: reality-oriented.” This properly applies to any cause you might join—and the causes you do join should be for the purpose of furthering your own life and happiness.

What is the alternative to Rand’s view of morality? The disciple of duty. A disciple of duty is concerned not with his own life and happiness, but with an alleged greater good.

One famous champion of this approach to morality—a 20th-century political leader—advocated “the common interests before self-interest,” called for a “state of mind which subordinates the interests of the ego to the conservation of the community,” and praised the “individual’s capacity to make sacrifices for the community, for his fellow men.” That leader was Adolf Hitler, who demanded that Germans live for a cause greater than themselves.

Or consider the terrorist attacks of 9/11. The men who hijacked jet planes and flew them into buildings full of people devoted themselves to a cause greater than themselves—the cause of serving Allah by engaging in jihad.

These are just a couple of examples; I’m sure you can think of many more.

The next time someone asks you to live for a “cause greater than yourself,” ask him whether he means a cause that advances your own life and values or a cause that requires you to sacrifice your life-serving values and thus damages your life.

Spreading those important truths to help people you value and to foster a rational society is certainly a cause worth joining.