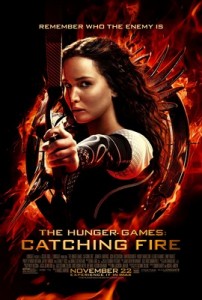 According to Sandra Lee Dixon, the new film The Hunger Games: Catching Fire celebrates violence rather than challenges it. But she entirely misses the point of the work and of the second of a trilogy of novels on which it is based.

Yes, the premise of the film is brutal and horrific: A tyrannical government forces each of twelve districts it controls to send children to fight to the death in a gladiator-style “game.” But the purpose of the stories is not to glorify such violence but to condemn it. As is made extremely clear by the Hunger Games films and the source novels written by Suzanne Collins, the oppressive regime uses many tools of violence—including the “games”—to brutalize and control the population. The heroes of the story do whatever they can to endure the violence and to rebel against the regime.

Contrary to Dixon’s misleading “review,” the focus of Catching Fire is not on the violence of the “games,” but on the characters who must endure and fight it and on their relationships. What is most memorable about the film is not its violence, but the loving relationships between main hero, Katnis Everdeen, and her family and friends, including other victims of the “games.”

The film is especially poignant given that the rulers of Communist North Korea recently executed dozens of people for such “crimes” as watching foreign television shows and owning a Bible—and that the theocratic regimes of Saudi Arabia, Iran, and elsewhere likewise murder their own citizens on a regular basis. Oppressive governments have used violence to control the populations they rule for thousands of years and continue to do so to this day. Hunger Games draws attention to such tyranny and encourages people to fight against it.

Catching Fire is an extremely powerful film with outstanding performances and direction. Although the film’s brutality is difficult to watch, the film focuses on the importance of freedom and loving relationships and on fighting against tyrannical government. Those are the reasons so many people read the novels and view the films, and those are the reasons the work deserves its prominence in the culture.

View all articles by Ari Armstrong →
Thomas Sowell, Richie Parker, and the Left’s War Against AchievementEvacuation Day: The Denouement of the American Victory for Independence
Return to Top