Evacuation Day: The Denouement of the American Victory for Independence

Shortly after the United States declared independence from Britain in 1776, British troops occupied New York City and, because of its pivotal location and resources, made it the center of their operations throughout the Revolutionary War. On November 25, 1783, the last remnant of British tyranny in the American colonies—its troops—were evacuated from New York and from the United States.

To celebrate this final victory, the British flag at Battery Park in Manhattan was to be replaced by the American flag, after which General George Washington was to proceed ceremoniously down Broadway. However, the departing troops had nailed the Union Jack flag atop a pole, which they had greased, hoping to foil efforts to remove their flag until long after they were gone. With assistance from others, Captain Van Arsdale spiked the pole, climbed it, tore down the offending flag, and replaced it with the Stars and Stripes. The crowd cheered as the British ships, still in sight of the flag, went packing.

Washington received a hero’s welcome on his triumphant return as he led his Continental Army down Broadway. In his book Life of George Washington, Washington Irving gave an eyewitness account of this event:

We had been accustomed for a long time to military display in all the finish and finery of garrison life; the troops just leaving us were as if equipped for show, and with their scarlet uniforms and burnished arms, made a brilliant display; the troops that marched in, on the contrary, were ill-clad and weather beaten, and made a forlorn appearance; but then they were our troops, and as I looked at them and thought upon all they had done and suffered for us, my heart and my eyes were full, and I admired and gloried in them the more, because they were weather beaten and forlorn.

Much of New York remained in disarray, mainly from periodic fires and British interference in trade during the occupation. The city rebounded beautifully and, a few years later, became the first capital of the new nation. In 1789, at Federal Hall, George Washington was sworn in as the country’s first president.

November 25, Evacuation Day, was a national holiday for eighty years, until the Civil War, when Abraham Lincoln introduced the Thanksgiving Day Proclamation, which called on Americans to observe the last Thursday of November as a day of thanksgiving. Thereafter, Evacuation Day faded from public memory. 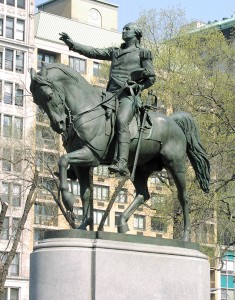 Fortunately, a great symbol of the event remains in Union Square Park: a statue of George Washington. The statue, designed by Henry Kirke Brown and financed by New York merchants, was unveiled in 1856, on the eightieth anniversary of the signing of the Declaration of Independence.

Although replaced as a national holiday by Thanksgiving, Evacuation Day should never be forgotten. It was the denouement of the U.S. victory in the war for independence, and it is a day about which to be grateful. Here’s to the men who caused it.