In Response to Navy Yard Massacre, Government Should Focus Exclusively on Protecting Rights 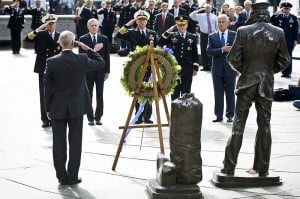 Within hours of the September 16 massacre at the Washington Navy Yard, various commentators and politicians were calling for more restrictive gun laws—on the theory that the government should respond to murders committed by a psychotic man by further restricting the liberties of rights-respecting Americans. How absurd.

There is a valid political lesson to be drawn from this massacre, however: The government has a responsibility to protect people’s rights by (among other things) appropriately responding to threats and acts of violence. Had the government done so with respect to this murderer—Aaron Alexis—the massacre at the Navy Yard never would have occurred. Consider why this is so.

To review: The government knew that Alexis was a psychotic and violent criminal, yet the government failed to prosecute him for his crimes, failed to act on clear warnings about his psychosis, granted him security clearance at a U.S. military installation, and disarmed U.S. soldiers in the crime area, thus giving the murderer ample time to fire away.

This massacre and others like it demonstrate that we need our government to do its job. Such massacres also demonstrate something we emphatically do not need. We do not need more laws that divert government resources from dealing with violent psychotics, such as Alexis, to tracking and harassing rights-respecting Americans.